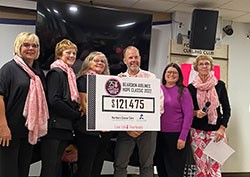 The organizing committee worked on planning the bonspiel for just over a year and in 1997 the first annual Bearskin Airlines Hope Classic was held. Linda Buchan approached Cliff Friesen, former Vice President of Bearskin Airlines about supporting the committee in this endeavour. Cliff's own daughter, Tammy Salidas, had also just undergone breast cancer surgery and treatment. Cliff was supportive from Linda's first meeting with him, and from that point on the committee has never looked back. The bonspiel is probably one of the most popular bonspiels in Thunder Bay for women curlers and the best part of the bonspiel is that all money raised stays in Northwestern Ontario. All money is donated to the Northern Cancer Research Foundation for breast cancer research.

The organizing committee lost its founder and chair, Linda Buchan, on December 11, 2002, just before the 7th Annual Bearskin Airlines Hope Classic. The 7th annual Bearskin Airlines Hope Classic was a little special and a little different ­ because it was the year that we passed the $500,000.00 raised and different because we were missing the person that started the dream. The committee, however, carried on Linda's dream.

Some of the areas where the money raised has been used are:

Linda never wanted the Bearskin Airlines Hope Classic to be about her. She wanted it to be about "making a difference to the lives of women in Northwestern Ontario."  Over the last 25 years this event has had an incredible impact on breast cancer care in the region and will continue to make a difference in the lives of so many for years to come.